It's been entirely too long since I published something (and in the process of writing this post, I realized how few pictures I've taken over the last three months.... shame on me!). The newborn and infant phases of parenting have really been taking everything out of me.

Daniel has left to go to work, and so in these smallish hours before the littles wake up, I have a little joy to share with you.

As you can imagine, having a baby makes going to the same Mass each week a bit arduous, so we do the sensible thing.

We don't worry about it. We get up when the baby makes us, and we go to the first Mass that's after she finishes nursing.

Pitter Patter has been doing well at participating at Mass for a long time. She does well with the Lord's Prayer and the parts where there is a little "call and response". (I know this is not the correct word for it, but she knows most of the shorter things she's supposed to say!)

She's a little shy about singing songs when she doesn't know all the words, but she sings a mean "Jesus Remember Me (when you come into your kingdom)", and she does awesome with the Mass parts.


Roo Roo usually is doing well to not wet her diaper as soon as we walk into the building. (Doesn't matter which building, either!)

But a couple of weeks ago, she decided that it was time to start participating, and she started singing with us during Mass.

When we started singing, she did too.  (Definitely not like screaming, but just kind of a toneless, "aaaaaaaahhhhh....") And then she looked at me like she was just so proud of herself as if to say, "Hear that, Mom? I'm just like you!"

I was just trying so hard not to die laughing. And it was so obvious that she knew what she was doing because when everyone else stopped, so did she.

She did the same thing during the Creed, the Our Father, and pretty much any place where something lengthy was recited or sung by the congregation.


We got a couple of comments after Mass from the little old ladies sitting nearby. "Future members of the Children's Choir" and similar. It just made my heart melt.


On the whole, the girls are doing fabulously.

Pitter Patter is just loving being a big sister - letting Roo Roo try to catch her toes is about the best thing ever. Roo Roo has become very adept at chasing her sister (in the walker) and she's just a smidge-bit away from crawling. (She does this "army crawl" thing. No real interest in standing / walking, though!) 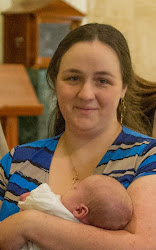